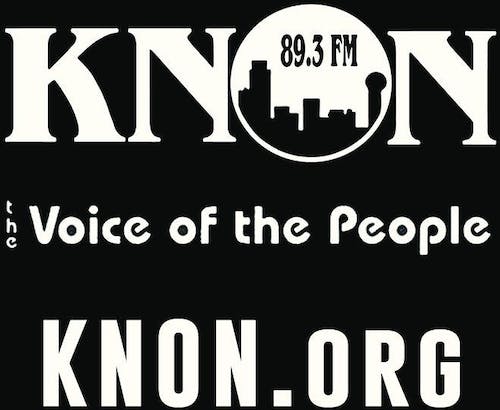 The office building housing the KNON studios in North Dallas suffered major damage during the recent tornado outbreak, including blown out windows, in addition, part of the building’s roof was blown off. Serious damage was done to the station’s main studio and offices. Some of the station’s broadcast equipment was damaged by the estimated 140 mph winds and broken glass and likely won’t be salvageable. Off air for less than 24 hours they are putting the pieces back together and building a new home for KNON. 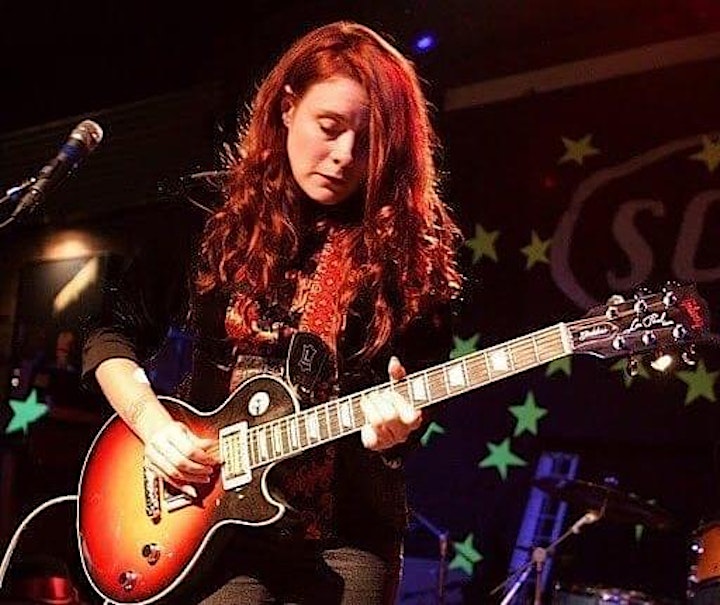 A musical force equipped with the soulful vocals of Janis and the guitar slinging skills of Stevie Ray, Carolyn Wonderland reaches into the depths of the Texas blues tradition with the wit of a poet. She hits the stage with unmatched presence, a true legend in her time.

She’d grown up the child of a singer in a band and began playing her mother’s vintage Martin guitar when other girls were dressing dolls. She’d gone from being the teenage toast of her hometown Houston to sleeping in her van in Austin amid heaps of critical acclaim for fine recordings.

Along with the guitar and the multitude of other instruments she learned to play – trumpet, accordion, piano, mandolin, lap steel – Wonderland’s ability to whistle remains most unusual. Whistling is a uniquely vocal art seldom invoked in modern music, yet it’s among the most spectacular talents the human voice possesses.

That vocal proficiency was well-established in the singer’s midteens, landing her gigs at Fitzgerald’s by age 15. She absorbed Houston influences like Little Screamin’ Kenny, Albert Collins, Lavelle White, Jerry Lightfoot, Joe “Guitar” Hughes, Little Joe Washington, “borrowed” a car to sneak out and jam, ended up swapping songs with Townes Van Zandt at Houston’s Local’s on White Oak, got involved in the underground theater scene becoming the first “Photochick” in Jason Nodler’s “In the Under Thunderloo” and soaked up touring bands like the Paladins, Los Lobos, and the Mad Hatter of Texas music, Doug Sahm. Her music played in television series such as “Time of Your Life” and NBC’s “Homicide.” The Lone Star State was as credible a proving ground for blues in the 1980s and 90s as existed, especially in Austin with Stevie Ray Vaughan & Double Trouble, the Fabulous Thunderbirds, Angela Strehli, Omar & the Howlers, and Lou Ann Barton all in their prime. By the following decade, Austin’s blues luster thinned, but Houston, always a bastion of soul and R&B, boasted the Impferial Monkeys with the effervescent Carolyn Wonderland as ruler of the jungle.

In the early 1990s Wonderland & the Imperial Monkeys were invited to the Guadalupe Street Antone’s in Austin. There, they were treated like royalty with the singer as the queen of hearts in the club’s post-Stevie Ray Vaughan stable, which included Toni Price, Johnny and Jay Moeller, Sue Foley, Mike and Corey Keller, and the Ugly Americans. It was a good bar for the Monkeys to hang, and Austin felt so comfortable that when the band called it quits a few years later, after a run in with black ice and a semi that wound young Miss Wonderland in the hospital, she set her sights on Austin at the start of the millennium. Besides, Doug Sahm had told Carolyn while they were signing autographs together at the High Sierra Music Festival she ought to move to Austin, as it was the land of free guitar lessons. She was there in months.

Living in Austin renewed Carolyn Wonderland’s focus on her multiple talents, underlining luxurious vocals with fine guitar work, trumpet, and piano, as well as that remarkable ability to whistle on key. Despite spending two years homeless (or as she puts it, “van-full,”) Austin has been fertile ground for Carolyn. A series of each-better-than-the-next discs began with Alcohol & Salvation in 2001 (“songs about booze and God; records are a time capsule of what happened that year”) 2003’s “Bloodless Revolution”, The Bismeaux Releases: 2008’s “Miss Understood,” 2011’s “Peace Meal” (recorded at Bismeaux and at Levon Helm Studios in Woodstock,) 2015’s “Live Texas Trio”; and here we are with 2017’s “Moon Goes Missing.”

Her circle of musician friends and admirers broadened to include not only Ray [Benson, who produced Miss Understood] but also the late Eddy Shaver, Shelley King, and yes, Bob Dylan, who likened her composition “Bloodless Revolution” to “a mystery movie theme.” She appeared on the same taping with Sharon Jones and the Dap Kings when she made her debut on PBS’ “Austin City Limits” (Season 35.) and had the thrill of her life when Bonnie Raitt joined her onstage for “The Road to Austin” concert film featuring Stephen Bruton and all his friends, got to play with James Cotton, Pinetop Perkins, and so many others at Antone’s, she and Erin Jaimes put together a benefit for Uncle John Turner and Johnny Winter insisted on bringing his band by to play, Carolyn’s wedding to A. Whitney Brown was officiated by Mike Nesmith (Monkees,) who serendipitously introduced them on set at VideoRanch in 2010. (there is video of the two of them on stage together that day!) She began co-writing with locals Sarah Brown, Shelley King, Marcia Ball, Ruthie Foster, Cindy Cashdollar, and Guy Forsyth; sat in with Los Lobos, Levon Helm, Vintage Trouble, Robert Earl Keen, and Ray Wylie Hubbard; and toured relentlessly for the past two decades, sometimes with luminaries like Dave Alvin, Buddy Guy and Johnny Winter, so far spreading her music in US, Europe, South America and Japan. She also claims membership in the all-girl Sis Deville, the gospel-infused Imperial Crown Golden Harmonizers, the Texas Guitar Women, and the Woodstock Lonestars.

Carolyn recently joined John Mayall’s Band as his guitarist and is balancing life on the road with writing time at home and on the road. She’s been touring for over 25 years and clearly ain’t done yet. Come see why at a show! (seriously, she’s perpetually on tour.) 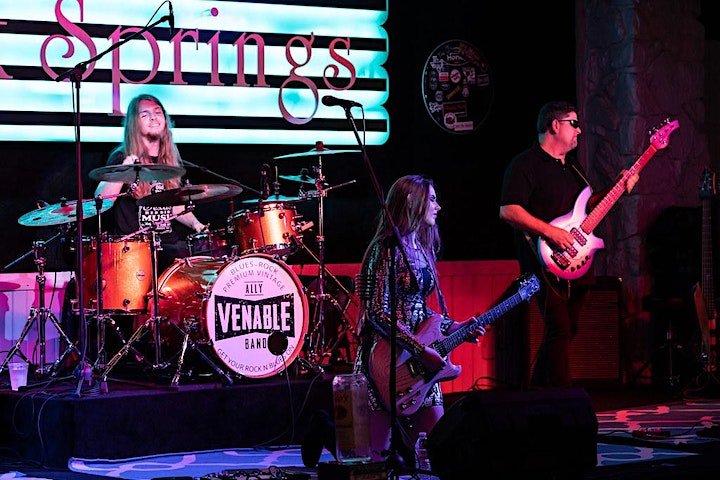 Tip a ten-gallon hat to a bandleader writing her own name onto Texas’ famed back pages. Ally Venable is poised to release her breakout third album, Texas Honey on the Ruf Records label March 22nd. Produced by another Texas guitar hero, Mike Zito, Texas Honey proves once again the soulful vocal, burn-it-down fretwork and heart-on-sleeve songcraft of Venable has made Texas hers for the taking.

She might only be hitting her twenties, but long-term fans will know this isn’t Ally’s first rodeo. Rewind to her childhood in the post-millennium and this rising star found her voice in church. It was the influence of fiery Texas guitar-slingers like Stevie Ray Vaughan, however, along with the melodic smarts of Miranda Lambert that showed her the path.

She has received many awards including the 2014 and 2015 "Female Guitarist of the Year ", three time winner of "Blues Band of the Year", "Album of the Year"- ETX Music Awards 2017. Guitar Player Magazine stated that," ​ "Venable pulls off a stunner of gritty and/or sultry blues-rock tunes embellished with lots of tasty guitar solos."

Each of Ally’s band mates are versatile on multiple instruments. As Bassist, Bobby Wallace is a master at his craft and his years of experience enhance the band. Drummer, Elijah Owings, brings a steady, but dynamic sound to the band. He is the backbone of their rockin’ blues sound.

Ally’s recent release ‘Puppet Show’ deputed at #7 on the Billboard Blues Charts, and continues to represent the future of the blues.