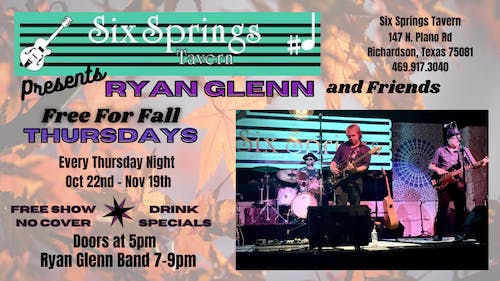 Ryan Glenn delivers thought provoking lyrics and infectious rhythms that are beyond his mere 18 years of age. He brings a distinct style to the Americana music world that's progressive, with a tendency towards the throwback sounds of his many heroes.

Texas-born singer-songwriter Bryan Adam Joyner weaves genuine and heartfelt tales that can only emerge from a personal history of love and loss. Fans won’t be surprised to learn that music has been a cathartic outlet for Bryan since he first picked up a Sears string-less toy guitar at age seven.

His narrative lyrics tell of a childhood marked with chaos as his family broke down economically and emotionally, to his own loves, breakups, and the birth of his firstborn daughter. While singing of his own personal experience, fans will relate to the universal emotions of triumph and despair.

Bryan’s musical taste spans from his dad’s honky-tonk favorites played on the family’s 8-track to 80s rock and 90s country. Self-described as a country singer who always wanted to be a rock star, his major influences include Garth Brooks, Dwight Yoakum, and Tom Petty.