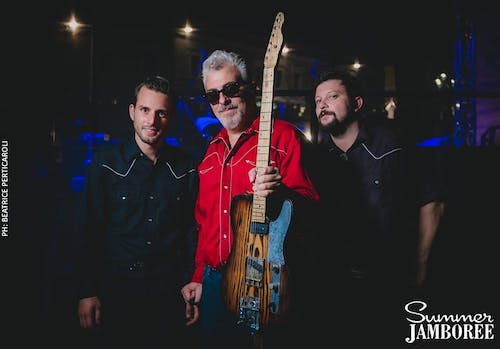 “Don” Diego Geraci, after 20 years of continuous activity with the Adels, decided to put together his own trio, where the various musical influences that have characterized his style, can merge in a unique show. So rockabilly, country, western swing, blues and rock and roll meet the typical “Italian taste” of the 42-years old guitarist from Sicily. The sound that came out is a mix of classic rockabilly, sixties country and honky tonk. You will enjoy the sound of a compact rhythm section, tight and always danceable, together with the virtuosity of the leader. All these features converge in his first solo album entitled “Twang Kitchen”(twang is the typical sound of Diego’s favorite guitar, the telecaster, and kitchen because the music was composed and developed in the calm of his home), registered and mixed by Diego himself, produced by Steve Rydell for Rydell’s Records (France).

Followed by “Roadhouse Stomp”, (for Twang Farm and Rydell’s Records), published at the end of 2015, a truck driving album, full of Diego’s tracks, including the “truck driver’s” hit titled “You’ve Got A Truck (But No Place To Go)”.

In October 2016 the “Hillbilly Session – Chapter #1” was released. 12 songs totally live-recorded with no overdubs in the quiet of the Sicilian countryside. 12 songs from classic Rockabilly to Bakersfield sound, from honky tonk to the ol’ western swing stuff. In the record you will find homage to the Diego’s big music heroes such as Red Simpson, Merle Haggard and Joe Clay.

In October 2017 the fourth album of the Don Diego Trio came out. It is the most exciting album they ever recorded in their life. The title is "Greetings From Austin" (El Toro Records - Spain). It was recorded totally live in Austin, at the Ameripolitan Recording Studio, owned by Dale Watson. The album is produced by a longtime friend of Diego, and even an excellent guitarist, who now lives in the USA and plays in the Dale Watson's band, mr. Mario Monterosso. It features a lot of "Ameripolitan friendly" artists like Teri Joyce, Mike Maddux, Chris Casello and Ted Branson.

Diego, born in 1975, began playing classical guitar very young (in 1986), then move on, like all his peers grew up in the early 90s, to rock first, and blues then. In 1994 he founded the Adels, first as a power trio oriented to a rockin’ Texas blues sound, then, over the years, in a neorockabilly formula known and appreciated throughout Europe. He played with them until the early months of 2014, when he decided to focus on his own project. He’s also a master of swing manouche and traditional rockabilly (the first kind played along with the “Golden EraQuartet” and the second with thedrumless trio “Rockin’ D and theFabulous Roosters” or the "Don Diego and the Two Steps" trio). Over the years he has performed with a lot of artists like Ray Campi, Hayden Thompson, Deke Dickerson, Slim Jim Phantom, Marvin Rainwater, Sonny George, Johnny Powers, Jan Svenson (aka Wildfire Willie), Johnny Falstaff, Chris Casello, Mark Harman, Mouse Zinn, Jack Greele, Ags Connolly, Jimmie Lee Maslon, Levi Dexter, Rip Masters, Pep Torres, Jake Penrod, Dale Watson, Earl Jackson, Kristyn Harris, Lew Lewis, Go Getters, Jake Allen, Clem Sacco, AndyJ. Forest, Rockin' Bonnie, Dave Phillips, Mack Stevens, Marti Brom, Rockin’ Piano Sam, Breelan Angel, TexasMartha, John O’Malley, Tony Marlow, Micky, Violetta Zironi, Antonio Sorgentone, James Thompson, Herbie Goins, Rudy Rotta, and many others!

He has played in some of the biggest festivals in Europe and in Texas (Ameripolitan Awards TEXAS-USA, Good Rockin’ Tonight FR, Walldorf Rockabilly Weekend DE, Highschooll Hop SW, Shut Up and Bop DE, Summer Jamboree IT ,City,Jamboree DE, Rockabilly Convention DE, TrashtownRockabilly CH, Rockabilly Festival HU, Hot Guitar Party Festival SP, Volcan Rockers SP, Block Country Festival CH, Vintage Roots IT, Pistoia Blues IT, CustomParty IT, Rock and Roll Party IT, Maverick RnR IT, Kustom Weekend IT, DieciGiorni Suonati IT, Summer Vintage IT... and many, too many others to be

He has done several times as opening act for artists of the highest level, as Brian Setzer (Rockabilly Riot tour 2011), Reverend Horton Heat (CustomParty 2013), BB King (Italian Tour 2002), Johnny Winter (Pistoia Blues2003), Jethro Tull (Pistoia Blues 2003), Paladins (Summer Jamboree 2013), Deke Dickerson (Rockabilly Weekend 2014), Los Straitjackets (Rome 2015), Nekromantix (Custom Party 2014), Restless (too many times to be mentioned!), Go Getters (also with them too many times to remember), The Jets (many times), Dave Phillips and the Hot Rod Gang (several times), SpaceCadets (Farewell Show); was often invited on stage by the headliners for memorable jam sessions (like the one with the Reverend Horton Heat or with the Restless, youtube is full of videos that testify their burning guitar duels).

He was invited by the supreme Deke Dickerson to take part in the first European Guitar Geek (Walldorf Weekend 2014).

He was also invited by the famous Go Getters as an additional guitarist for their tribute show to Ronnie Dawson (a hero for Diego and Peter, the GoGetters’ leader).

Don Diego works for the most important guitar magazine in Italy (Accordo.it), talking about classic sounds, vintage guitars and a lot of interviews. He’s also the artistic director of several festivals in southcentral Italy and creator of the“Guitar Friendzy”, an exhibition dedicated to the custom instruments and vintage in Sicily. He recently created the“Twang Festival”in Milan, a reunion of twangin’ pickers. He’s also member of the “house band” in different festival all over Europe. He has recorded several cds with the Adels (13to be exact) and has an experience of almost 200 live shows a year.

He has done workshops throughout Italy talking about the techniques and tricks of history’s most famous rockabilly guitarists.